After taking a sort walk around the neighborhood this morning

we headed to Guayaquil from Cuenca today. The owner of the hotel suggested we take a small van. He set us up with a company called Cotourscia, who ended up taking us to Guayaquil in a Hyundai Tuscon. With just Karen and I as passengers it was a very comfortable trip. When the driver was putting our bags in the back of the vehicle I thought he was being a bit anal the way he took the time to make sure our bags couldn’t move side to side, that was until we entered Cajas National Park and started winding our way up and over part of the Andes. The roads are in great condition but, WOW, do they ever twist and turn. 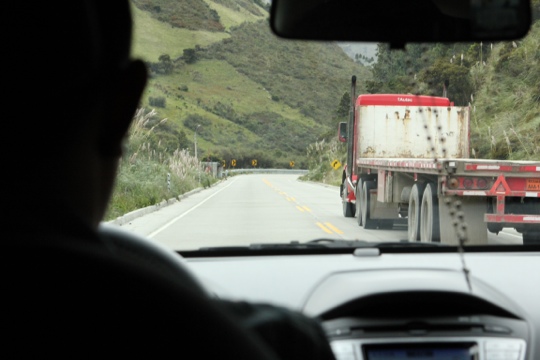 And yes we passed that truck before the corner. The terrain is beautiful and quite rugged.
Just outside of Cuenca, before we even got to Cajas National Park we got stopped by two Police Officers doing some type of document check. After taking Karen and mine’s picture and a photo of the car, as well as going through a bunch of the drivers documents, they let us pass. When we asked the driver if everything was ok he said yes, they just wanted money.
We had the van drop us off at the airport to get a cab to our hotel. We did that on the suggestion of the hotel owner in Cuenca. He said we will have no problems with taxis we get at the airport and he was correct. Our hotel in Guayaquil, Murali Hostal, is very nondescript and inexpensive. The area it is in is very near the airport, which is why Karen pickedb it. But with the location you get a more industrial neighbourhood and more road noise.
We tried walking to the Mall de Sol after we got our room, but ended up a little lost so we grabbed a taxi to complete the trip. It is a nice big modern mall and reminiscent of home. We tried to go see the Avengers after we ate at Tony Roma’s for supper. Unfortunately the time we were there was the showing of the Spanish dubbed film not the subtitles edition, so no movie for us.
Off to Montanita tomorrow.

0 comments on “A trip through the Andes”