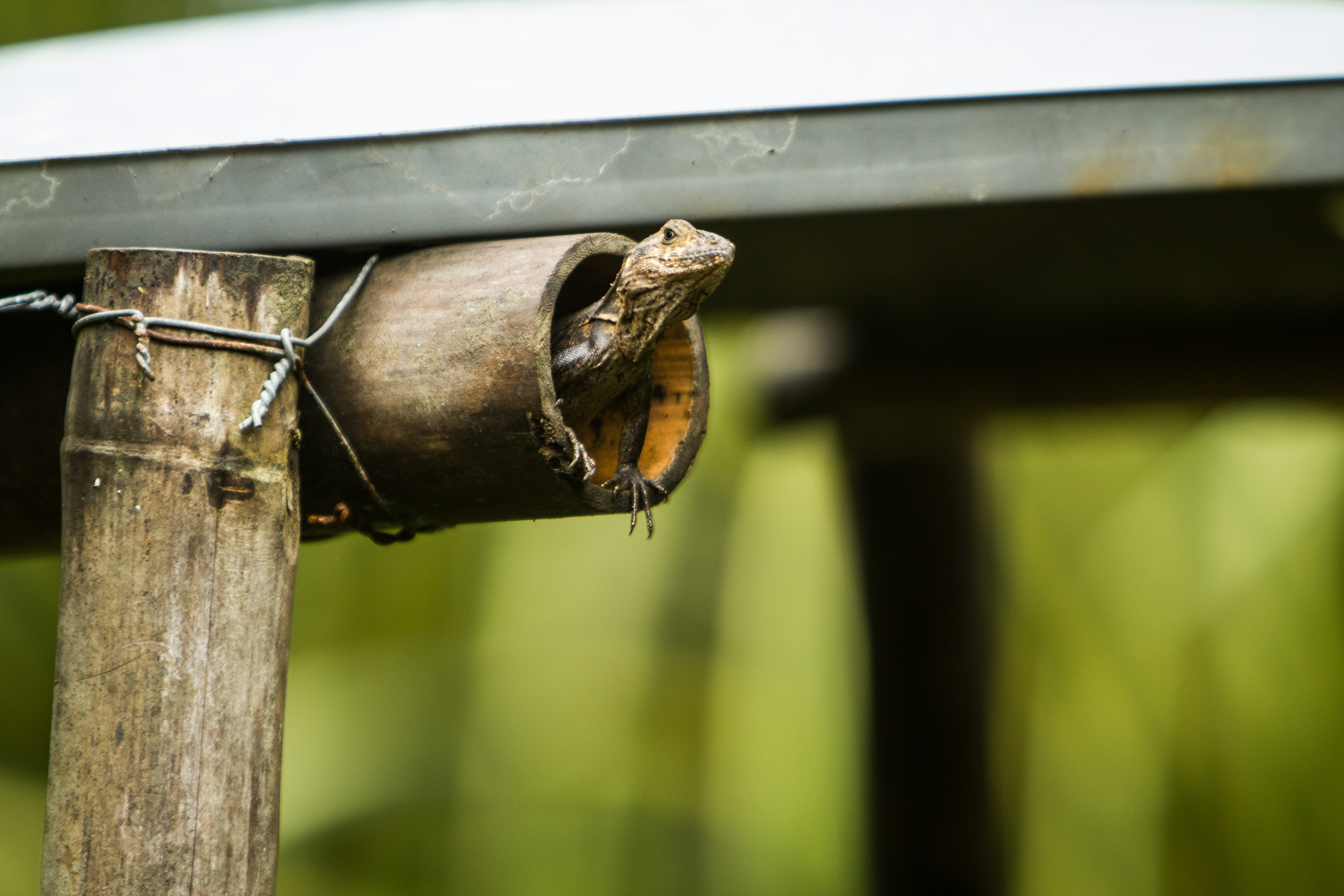 When we first agreed to this house sitting job we were told that there was a good possibility of seeing monkeys and even sloths. That ended up being an understatement. In our first three weeks here we have been bowled over with the diversity of the wildlife we see in our yard every day.

Though having a troupe of monkeys rambling through your yard is pretty freaking cool, it is even more impressive when you start to notice all the other animals around you. As I was reading in a hammock last week I had the pleasure of watching a Howler monkey apparently following a Black Squirrel through the tree tops. I have no idea what was going on, but it was amazing to watch the smoothness and stealth with which these animals can move when they want to.

This was brought home to me earlier when we had a local lady point out a 2 toed Sloth relaxing in a tree directly above where I had been reading in a hammock for the last 90 minutes. I never saw any indication of it until it was pointed out to us.

The number of different types of birds is incredible. Thank goodness there is a “Birds of Costa Rica” book in the house. I have tried to correctly identify the birds I have managed to get photographs of (feel free to let me know if you notice any obvious errors). It is cool to watch a mixed flock of birds busily working its’ way around the yard searching for food. It is slightly less enjoyable when the Grackle’s, and squirrels, decide to eat the seeds from the trees that hang over our roof. The sound of these large hard seeds hitting the tin roof irregularly for several hours can start to take the shine out it.

I don’t mean to make it sound like we spend all our time in the hammocks, it is just that when you lay quietly among the trees you start to notice what is going on around you. Sometimes it can even get quite earthy. We were treated to front row seats of Iguana coitus from our hammocks shortly after arriving.

The monkeys deserve and bit more attention. They certainly are just as intelligent and entertaining as most people believe them to be. They do not like it when you point things at them. Makes them a challenge to photograph but probably helpful in surviving other encounters with humans. As well they are truly mischievous little buggers. Other than seeming to take pleasure in tormenting the earth bound dogs in the area they also like to make noise. Whether it is smashing a coconut against a tin roof or finding a loose piece of sheet metal on the roof and grabbing it while aggressively jumping up and down slamming it against the roof. (Watched them doing that to the neighbours house) It is also fascinating to watch them methodically open up a coconut in a tree and drink the water from it then enlarge the hole and reach in and pull out the meat of the coconut and consume it.

There are also the creatures that seem to have no problem coming much closer to humans. After coming back from a run with Omber I thought I noticed something in his water bowl as he was drinking from it. Well indeed, there was a large toad sharing the bowl. The amusing part was that Omber was not the least bit bothered. (I’m sure the experience was a bit traumatizing for the toad). Once I got Omber to stop drinking we were able to let the toad escape.

I have to acknowledge that the dog we are watching is impressive in the way he handles the variety of creature that he has to share his yard with. He does not like the monkeys but everything else seems to be a case of live and let live. Be it iguanas, crabs, birds, bats, moths and other dogs walking on by.

We have taken to naming the various iguanas in the yard. If they get a chance they seem to settle in to an area and call it home. We have resident ones in the barbecue, bodega, car gate and man gate. It is funny how you can get used to hearing a 10inch long iguana slithering around inside the gate you are unlocking and opening and your only response is to say “good morning Gary.

I have only focused on the animals I have managed to get photos of for the most part. But there is also the regular parade of bats, hummingbirds, Fly catchers, parakeets, as well as at least another dozen birds that we have yet to identify. The opportunity to be able to lay back and allow the animal world around you to get used to you and carry on as if you are not there is an inspiring experience. No matter where you are in the world, take the time to lay back and not move in your yard for an hour and be amazed with what you may notice for the first time no matter how long you may have lived there. (This suggestion does not apply to Canada from November to April)

8 comments on “Living in a Zoo”