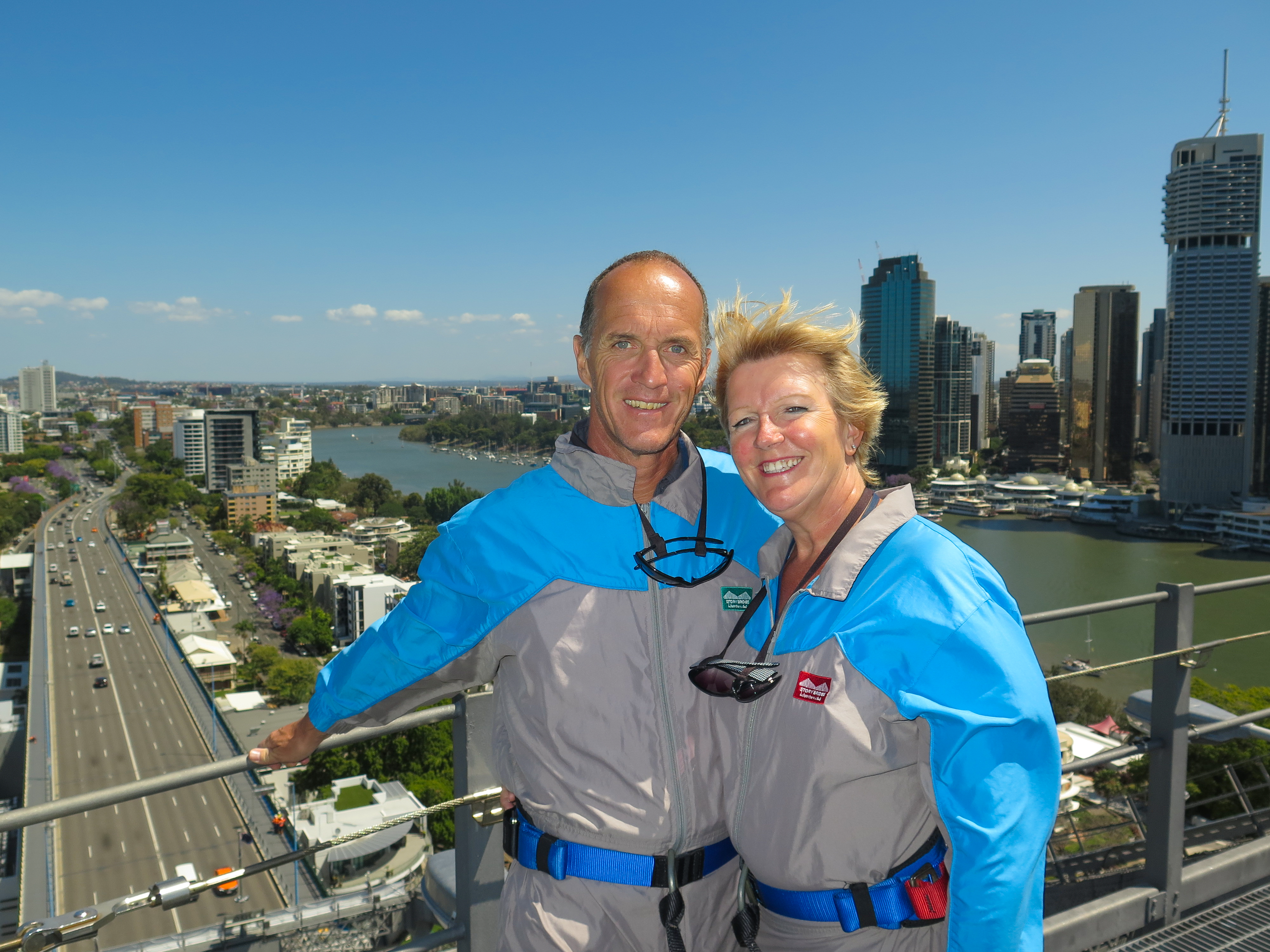 Having finished our first month in Australia I thought it was time for a little update. We have been able to explore a bit of the Brisbane CBD and some outlying areas.

In addition to Auckland and Sydney, Brisbane has one of the three bridges in the world which you can climb to the top of. We were fortunate enough to have a very small group for our tour. Karen, myself and our awesome guide Paris.

If you are ever in Brisbane and thinking of this tour make sure you go to the website of the company as major savings can be scored there. As well, they now give you a free copy of all the photos taken on the tour. A pretty good deal, as no one is allowed to take cameras, or anything else up on the bridge. In fact, if you are doing an afternoon tour make sure you skip the beer with lunch as you have to blow into a breathalyser before the tour. The operators give an outstanding tour with tons of information, but they take their access to the bridge very seriously.

In addition to the amazing views I had the questionable distinction of being the first customer to actually be hit by the resident crow that has a nest on the bridge. We were warned before we headed up of the crow and that it would do some flybys and squawk at us. However it must have been our small group because it chose me to actually push with it’s feet and hit in the head with it’s wings. It made for a very memorable trip. I highly recommend it.

One of the things that makes exploring Brisbane and area so easy is the public transit system. We have had an opportunity to use the buses, trains, and boats with absolutely no problems. I would suggest getting a GO Card at any station which allows you to simply swipe on and swipe off any part of the system and your balance is constantly updated and relayed to you. The $10AUS for the card is even refundable when you are done with it and want to get any balance left on the card paid back to you. Love it.

Karen and I utilized the transit system to head to North Stradbroke Island, “Straddie” to the locals. Though the day was a bit dreary looking it ended up being perfect for walking around the island. The ferry out to the island and the bus on the island are not part of the Brisbane transit system, but they are worth the money they cost. The passenger ferry is fast and the bus on the island is a carnival ride all it’s own. The drivers were very skilled and I’m pretty sure they would do very well playing “Forza” on Xbox, the way they handled the curves on the island roads. To be fair, I never felt scared, just entertained.

We were able to see some whales in the distance from the island and some dolphins swimming closer to shore. As well the time spent on Cylinder Beach was enough to help me understand why this is such a popular destination for locals.

Another activity I managed to take in was a 10km road race being hosted in the town where we were house sitting in Manly. A fellow expat and good friend, Bryce, joined me for a fun race up the shoreline with beautiful views the entire way. It is a wonderful way to integrate with locals with similar interests.

Another great event we were able to take part in was the Manly Town Halloween party. It is advertised as the biggest halloween party in Australia and from what we saw it certainly was well attended. The streets started filling at noon and were pretty well packed until 9:00 when the fireworks over the harbour signalled the end of the festivities.

In addition to the fencing club there were remote controlled sailboats, standup paddleboard and Dragon boat demos to entertain. As well as rides and enough carnival food to satisfy anyone. It was wonderful to see a community based event so well attended with so many families and costumes.

We certainly enjoyed our time house sitting in Wynnum/Manly and are looking forward to our next gig in Griffin. We will miss Bentley and his wonderful personality.

And I would be lying if I said I was not going to miss this view every morning as I got out of bed.