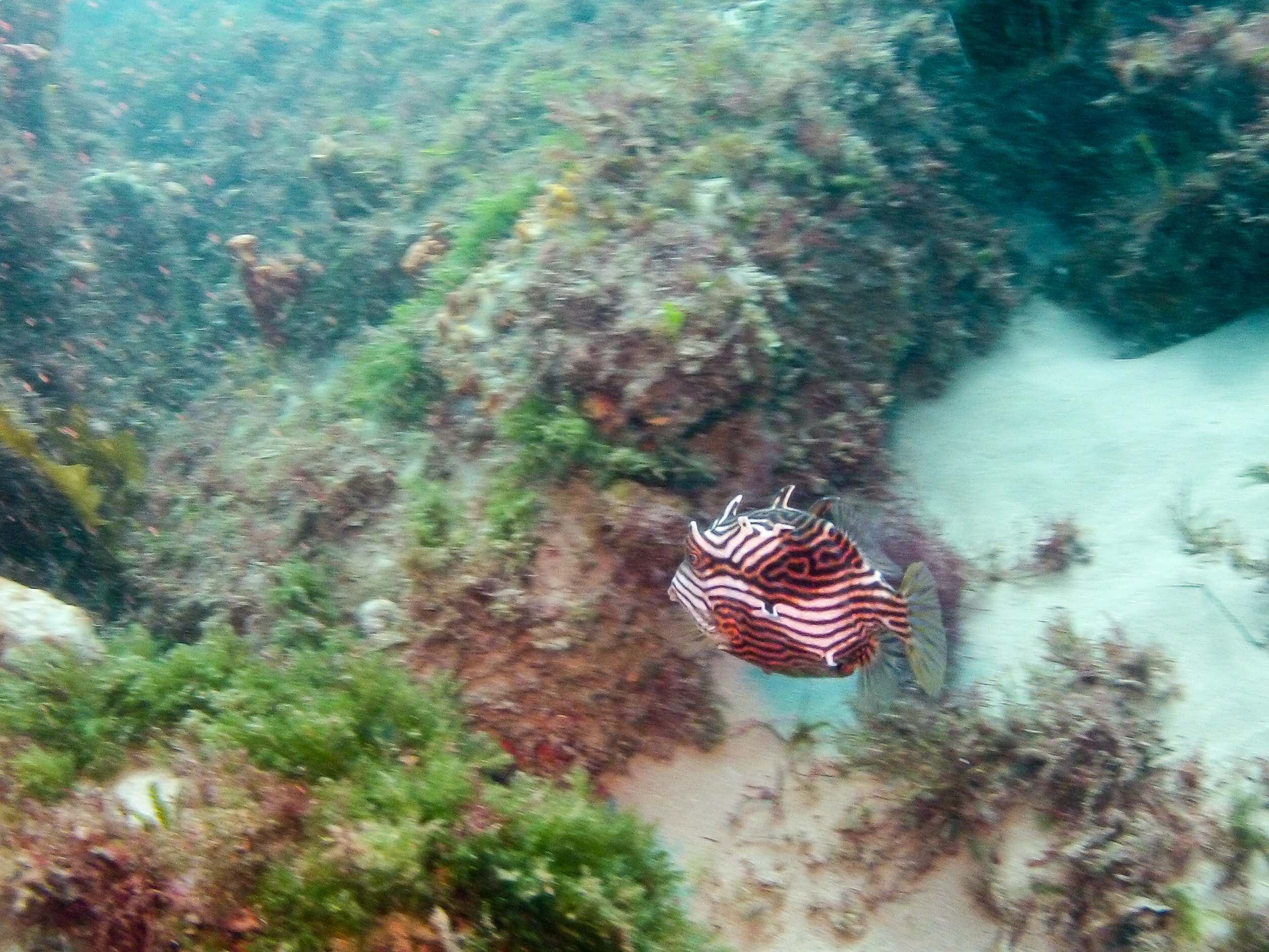 On a recent road trip between Melbourne and Adelaide we took the opportunity to do a couple of days of diving. In Geelong, just outside of Melbourne we went out for a single tank dive and a snorkel. To be honest, not the best diving we have done in a while. The operators were good and the equipment was good, but “Man!” was the water cold. We certainly have become spoiled over the last couple of years. The water temperature was 11C and even though the 7mil wetsuits did their job there is just no minimising that initial shock as you hit the water. The first dive was at a place called Pope’s Eye. Lots of kelp and fish but between the current and the cold we did not enjoy that dive as much as we could have. Still beats the hell out of working though.

After the dive, the boat headed over to a snorkel location called Chinaman’s Hat. It was rather humorous seeing a bunch of humans jumping in the water to swim around this structure while a couple of dozen Fur Seals stayed out of the water watching us. One eventually joined us in the water and I was able to get a little bit of video of it as it was playing in the water near us.

The best diving by far was when we got to South Australia and met up with Underwater Sports Dive Centre at Wirrina Cove, a bit south of Adelaide, and headed out in their boat “Aladdin”. The rental equipment they provided was top notch and their professionalism was what one expects in a dive operator. Other than the excellent rental gear they brought to the dock for us, the first hint we were in for an outstanding day was the classic rock music coming from the boat as we walked down the jetty. We received a basic briefing before leaving the harbour, then the music was cranked and we cruised out for the short trip to the exHMAS Hobart dive site.

The briefing at the exHMAS Hobart was fantastic. Complete with diagrams and explanations we knew exactly what to expect and what the plan was before we got in the water. As well, we had two apprenticing dive masters along with the official dive master going down with us. We were very well looked after. I have to admit a slight bit of nervousness went through me when I realised Karen and I were the only two without any type of personal anti shark devices on our bodies. The apprentice dive master explained that he had one that was intended to cast a wider range of protection. It was not until later that I learned that the effectiveness of this technology is still being discussed. It did make me feel better at the time.

The visibility on the Hobart was a bit limited but it was still an excellent dive. The wreck is in great shape with an amazing amount of sponges and marine life encapsulating it. When we came up from the dive the skipper had the song “Ghost Riders in the Sky” playing over the speakers on the boat. It was the theme song adopted by the crew of the Hobart when she was in service. It rounded out the experience nicely.

During the surface interval between dives we headed over to Rapid Bay jetty. This site can be accessed from shore but is much simpler from a boat. The old jetty has been abandoned by a mining company and now serves as a fishing and diving destination. The water beneath the jetty is teeming with life and with the columns rising to the surface and the sun casting shadows it becomes an other worldly experience. The dive masters also delivered on finding a Leafy Sea Dragon for us to observe. Certainly one of the coolest animals I have ever seen.

With the Rapid Bay Jetty dive being only 8 metres deep it provides the perfect ending to the day. You basically can stay down as long as your air holds out and there is an endless variety of nudibranchs, sponges, fish, and other sea life to entertain you. The video is a brief glimpse at some of the sights we were fortunate enough to take in. Please enjoy.